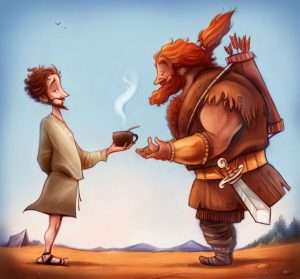 I love this picture of Esau. Unfortunately the version we read doesn’t quite catch the flavour of his speech —

Let me please gulp some of that red, that red there because I’m exhausted!
Genesis 25:30


And so they called him Edom (which in Hebrew means red), how’d you like to be known after your favourite food?!  If it was me it would be:  “Hey you, steak & chips!”   There’s no doubt that Jacob is the real villain in this piece as he tricks/manipulates his brother into giving away his birthright…


Esau prattles on, showing he is far from being on the point of death and showing he doesn’t care about his privilege that the ancient world held dear: “Of what value to me are the rights of a firstborn?”

Jacob’s curt three-word reply in Hebrew is, “Swear/to me/at once,” confirming that he is cold and calculating, determined to cash in on his brother’s folly. Look back at that language — Esau sold to Jacob while Jacob gave to Esau.

I mean it’s hardly a fair exchange is it?  What did Jacob give? Not a nice rich meaty stew, but only a dish of lentils. Fancy trading all those treasured rights of inheritance for a mere bowl of lentil soup.

You have to wonder about Esau:

Notice he doesn’t say anything? Doesn’t he really care about his birthright, or has he realised that he’s been tricked and bitterness is already making it impossible to talk to his brother?


The Parable of the Sower

I’m not going to really talk about the first part — The Parable of the Sower — just a few words on the introduction and conclusion:

And he told them many things in parables, saying: “Look!”
…
Let anyone with ears listen!”
Matthew 13:3,9


It’s interesting that the translation we read says listen at the start but the actual word is look!  All three of the failed soils listened but they didn’t really pay attention to the seed that Jesus was spreading, the fourth soil, however, is made up of those people who “stop, look, and listen” to the precious word of Jesus!

The Great Aside: The Paragraph of Privilege

Jesus goes on to explain to the disciples about the enormous privilege they (and we) have.

To you it has been given to know the secrets of the kingdom of heaven.
Matthew 13:11


The disciples have it even better they have the mystery in person!  But notice “Your having me is a gift given to you — not an acquisition earned by you”.  Jesus calls us, we don’t call him:

You did not choose me but I chose you. And I appointed you to go and bear fruit, fruit that will last,
John 15:16


Our faith appears to be a human act (responding to God’s word) but it’s only possible because of a prior divine enabling, we are called by God.


We are born as children of God by the will of God!  I don’t think anyone wakes up and says I think I’ll become a Christian today! What enormous privilege we are given, what a tremendous gift!

I don’t understand the full sovereignty of God —

but to them it has not been given
Matthew 13:11


This is hard, but the sentence can’t be explained away and the only way to accept it is if we are prepared to let God be God.  Jesus goes onto explain that’s why he speaks in parables —


As Isaiah said eight centuries ago and Jesus repeats now, the people will listen but they can’t or won’t understand.  They’ll do a lot of looking at but they will never look into!  Martin Luther explained it this way

What does this mean, but that the free will, or human heart, is so held down by the power of Satan, that, unless it is miraculously raised up by the Spirit of God, it cannot of itself either see or hear things that strike the eyes and ears, so plainly as to be palpable?
Martin Luther, On the Bondage of the Will


Without this tremendous gift, the enormous privilege of being called by God, we are so much slave of sin and Satan, downtrodden that even, even if we were slapped in the face with the truth of Christ we would not understand it.

But blessed are your eyes, for they see, and your ears, for they hear.
Matthew 13:16


Look at the emphasis — your eyes, your ears!  Jesus points out, the Old Testament heroes, great heroes of the faith, never got to see and hear what we do:

Truly I tell you, many prophets and righteous people longed to see what you see, but did not see it, and to hear what you hear, but did not hear it.
Matthew 13:17


Who are they? When you get home read Hebrews chapter eleven, it lists a handful of these that lived by faith:

Abel, Enoch, Noah, Abraham, Sarah, Isaac, Jacob, Joseph, Moses, Rahab, Gideon, Barak, Samson, Jephthah, David and Samuel and the prophets
…
And all these, though commended through their faith, did not receive what was promised…
Hebrews 11:39


This great aside, the paragraph of privilege, reinforces one simple fact — it was not your doing that gave you hearing; it was the Lord’s!

The hearing ear and the seeing eye—
the LORD has made them both.
Proverbs 20:12

The Interpretation of the Parable of the Sower

And so Jesus goes on to explain  “You therefore must now listen carefully to the parable of the sower”.

First of all notice all four types of people, hear the Word.  The Greek suggests active and continuing listening to the word, none of these people are the type who instantly reject the word of God, the atheists.  All of these people could be church-goers, certainly numbers three and four are and possibly number two. 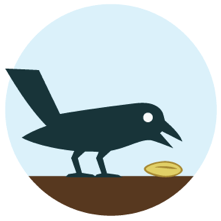 When anyone hears the word of the kingdom and does not understand it,
the evil one comes and snatches away what is sown in the heart;
this is what was sown on the path.
Matthew 13:19

The footpath ones hear the word but don’t understand it and so Satan snatches it from their hearts. 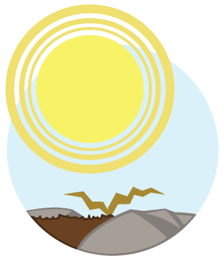 As for what was sown on rocky ground, this is the one who hears the word and immediately receives it with joy; yet such a person has no root, but endures only for a while, and when trouble or persecution arises on account of the word, that person immediately falls away.
Matthew 13:20-21

The second group are described as genuine converts: immediately receives it with joy; from here on all of them accept the word, and so are professing Christians, but only one of them bears fruit. That’s an interesting statistic for Church membership.
Is that you? Do you have deep roots of faith?
We all should pray for deep roots of faith and staying power!

As for what was sown among thorns, this is the one who hears the word, but the cares of the world and the deceitfulness of riches choke the word, and it proves unfruitful.
Matthew 13:22 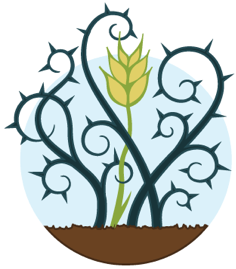 The third group have root and so they haven’t truly lost their faith but they don’t benefit from it!  The subtle enemy of wealth lures them away from salvation.

But as for what was sown on good soil, this is the one who hears the word and understands it, who indeed bears fruit and yields, in one case a hundred-fold, in another sixty, and in another thirty.”
Matthew 13:23 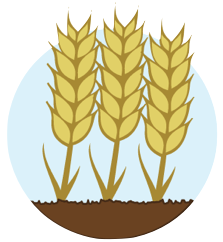 Look how simple the last group are, they hear, they understand, they produce fruit and do things. Yields in the Greek is ποιεῖ and it is mistranslated there it actually means does work!
To bear fruit you need to do work! 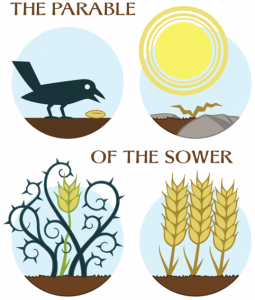 So, we have this great explanation.  Now ask yourself, what group are you in?  Do you have deep roots? Are you distracted by the world and the lies of an easy life through wealth?

You, see as Jesus explained it has been given to us the enormous privilege to hear and see the gospel.  When we accept Christ, when we are baptised, we are born again of the Holy Spirit.

We become heirs of Abraham, we can call our God “Abba, father”.

That becomes our birthright!!  Treasure it, grow it though sacrament, studying the word, and constant prayer.

And whatever you do, don’t despise it by trading it in for a bowl of lentil soup!

Previous
The Lord's Lord's Prayer Part 2
Next
Assurance of Salvation