From that time Jesus began to proclaim, “Repent, for the kingdom of heaven has come near.”
Matthew 4:17 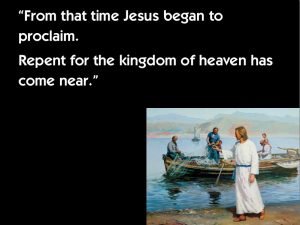 This announcement which Jesus came proclaiming was, a new way.

Humans long for a new way.  A world of prosperity, justice, and peace.
A world where we as individuals are valued
And we look for leaders to get us there. (What were people hoping for in Trump?)

Humanity longs for a world where poverty and war will be no more.
Where violence and greed will be judged and put away forever.
All people will have a fair share.
We hear so much bad news we long for good news.
This young prophet Jesus was bringing the greatest new this world can ever hear.

The kingdom of heaven has come near
Matthew 4:17

However, it does not always appear that way to all, or most people.
For indeed few recognised it as such, then, and today, they still don’t.
So what was Jesus saying?
The good news is that in the person and ministry of Jesus,
God’s heavenly reign was now breaking in upon earth.
Any first century Jew, hearing someone talk about God’s kingdom or the kingdom of heaven, would believe that it was a movement to oust the pagan occupiers, Rome, and Herod, Rome’s puppet ruler.
They longed to be free, when God came to reign as King.
Jesus came proclaiming, that in himself it was at last happening.
At his baptism a voice from heaven said

This is my Son, the Beloved, with whom I am well pleasedMatthew 3:17

He came up from the water of baptism and received God’s Spirit, which declared him to be God’s true Son, Israel in person.
If this was happening, it meant everything was going to change.
But that change meant danger as well as hope.
For Jesus’ coming was truly revolutionary.

If a kingdom of justice and peace is breaking in to this world where injustice and the violation of peace are common, those who are usurping God’s reign may be in trouble.
Herod knew this, that’s why he sought to have the Christ-child destroyed, and many, at that time, in power, knew it, so they set out to destroy him.
This has been so throughout Christian history.
The powers of this world too often violently oppose the reign of God. 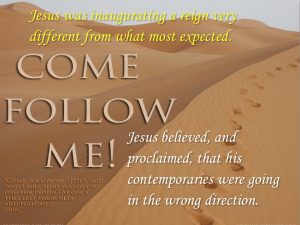 But Jesus was inaugurating a reign very different from what most expected.
Jesus believed, and proclaimed, that his contemporaries were going in the wrong direction.
They were looking for a military style take over, which in its actions becomes part of the problem.
Killing and controlling those you conquer.

Jesus way was so different.
When Jesus came, he came not as a conquering king, but as a ‘suffering servant’, identifying with humanity in their sin, taking it upon himself.
In order that they might find forgiveness of sins and new life.
This was the long hoped for good news.
Jesus was the One who would bring healing to the age old sickness of sin, and alienation.

As testimony to this, God’s Spirit descended upon Jesus and remained upon Him.
Therefore as God’s true Son, he would baptise believers with the Holy Spirit.
Why? So that they might follow him, and do the works he was doing, and go and make him known.
As King, he now begins to call a people to follow Him. 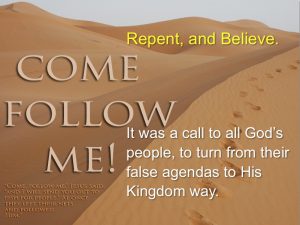 This demands a radically new way of being God’s people.

So his call is Repent, and Believe.
It was a call to all God’s people, to turn from their false agendas to His Kingdom way.
Because this world is not the way God intended, or intends it to be.
It is an upside down world. 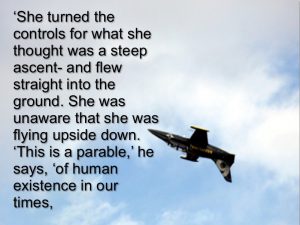 Dallas Willard tells of a pilot practicing high speed manoeuvres in a jet fighter.  He says ‘She turned the controls for what she thought was a steep ascent- and flew straight into the ground. She was unaware that she was flying upside down. ‘This is a parable,’ he says, ‘of human existence in our times, not that everyone is crashing, though there is enough of that, but that most of us, individuals and world society as a whole, live at high speed and often, with no clue to whether we are flying upside down, or right side up, or if it makes any difference.

But Jesus does know, and he came to announce, that he is starting to put the world the right way up, to demonstrate the kingdom’s powerful presence.
Futurologists seek to predict the future without reference to God, as if the future was purely a matter of human ingenuity, of human power and control.
Rulers and Politicians, economist, scientists, and the like, try to get it right-side up, without reckoning with God.
We see the results everywhere. And it is not too hopeful.
However when Jesus enters this world he proclaims God’s future.

So Jesus’ teaching is a challenge to God’s people, to be His people in His way. To repent and to follow Him. Turn from flying upside down to right side up.

It is God who is King.

And those who would be God’s people, must trust in, and obey Jesus as Saviour and Lord and follow him. 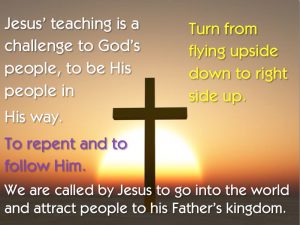 It is by his work that the future reign is becoming a reality.
And those who He calls must follow in his way, as disciples, living a radically new lifestyle.
The goal is not heaven, but heavens kingdom coming upon earth.
‘Your kingdom come on earth as it is in heaven’ is to be our prayer and our life.

When the rich young ruler stood before him, Jesus called for radical discipleship.
Get rid of the false god you trust in, your power and money, give it to the poor, and come follow me.
The question for us; ‘What is it we are trusting in?’ What are we hanging on to?

For we are indeed a rich, privileged, society, and, Jesus tells us, ‘it is hard for the rich to enter the kingdom of God.’

When Peter came to Caesarea to speak to the Roman Centurion, Cornelius, he preached Jesus.
Finally he announced, everyone who believes in him receives forgiveness of sins through his name.”
At that moment the Holy Spirit fell on those Gentiles who heard and believed.

And nothing has changed. If, as we look at this beautiful world, the creation of God, and recognise the awful violence and injustice that sin has produced.
If, as we look, we yearn for God’s righteous reign, and if we seek to live lives that reflect his will.
Then rejoice, for with Jesus’ coming, God’s reign has begun.

Follow me, Jesus said to the first disciples, and I will make you fish for people.’ Immediately they left their nets and followed him.
Jesus has begun a new era for God’s people, and God’s world.
In this world, most people still think, and believe, that wonderful news consists of doing it our way, worldly success, wealth, long life, victory in battle. (Betting ads, build-up of tension in S China sea)

Jesus in this new, right way up world, is offering wonderful news for the humble, the poor, the mourners, the peacemakers, those who forgive and love their enemies, and feed and shelter the poor, and who go the second mile and turn the other cheek.
Who know and love Jesus, and daily follow him.
What wonderful news as we look out into a new year marked by so much that is destructive and in need of God’s newness.

But also, what a challenge for us, to take Jesus at his word.
To seek to understand what God has done already in Jesus, and what he wants to do through us today.
To work out what his call means for us.

We, who are to be the Salt and Light of his Kingdom.
Who are called to fish for people.
Not to be religiously cosy, and self – righteous.
But to be new people.
People, who with the presence of the spirit, and with the gospels before us, have been led to a personal encounter with this amazing Jesus.

Previous
Jesus is Baptised
Next
Totally Devoted to You