There was this Catholic priest driving a devout but simple member of his congregation along a country road in Ireland one day when he accidentally ran over a rabbit.

He stopped the car, and the two men got out and walked over to where the poor old bunny was lying. It wasn’t moving, it looked dead. But then the priest went back to the car and fetched a bottle from a bag he had in the boot. He opened the bottle and sprinkled a few drops of liquid onto it. It immediately twitched and started coming round. He then sprinkled a few more drops on it and it sat up, looked around, and then hopped away.

His passenger was amazed. ‘My goodness, Father,’ he said, ‘that must be powerful holy water you’ve got there!’


‘Not a bit of it,’ replied the priest. ‘It’s Regaine, scientifically proven to restore hare if used twice daily.’ 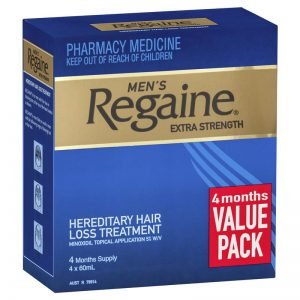 Do you believe in Jesus? I mean really BELIEVE in Jesus?

What does it mean for you to believe in Jesus?  I can rattle off the answers:

But… are you sure?

The disciples believed in Jesus:


They just didn’t understand him fully, I mean when Jesus heard that Lazarus, his friend, was sick he says “Let’s go to Judea again.” John 11:7

And they’re all like  “oh no no no no no Lord, it’s too risky, they just tried to stone you there”.

So, how far do they trust him? If they’re worried about safety, it doesn’t sound like true belief does it?

Our friend’s fallen asleep — phew, we thought it was serious — he’ll wake up — let’s not go.

So Jesus tells them plainly. “Lazarus is dead.” And you can see that they’re still worried about their safety:

You see the disciples’ belief in Jesus still needs to grow and be strengthened. When it came to the crunch their faith still wasn’t enough to sustain them.

John’s gospel is full of light and dark images, and the light comes from Jesus:


Jesus is telling us that, while you walk under God’s direction, while you remain close to Jesus, the light of the world, your path will be clear. Even when the darkness of opposition is threatening, if you walk in the light you’ll be safe.

The disciples are overwhelmed by the prospect of the danger they will face going back to Judaea and start to stray away from the light. Yes, they believe, but they still need to grow in their faith in Jesus.

Why did Jesus Delay?

In fact this is such an important thing that Jesus has delayed his departure so that by the time they arrive Lazarus will have been dead four days. That is, he’ll be really dead!

What would Mary and Martha be thinking?  They’ve asked Jesus to come urgently and they wait and wait and nothing happens!

What would you be thinking? Does Jesus really care? Or maybe it’s too difficult for Jesus?

Have you ever wondered why God takes so long to answer your prayers?

But it might also be that God is waiting for something. Waiting for the time to be right perhaps. Waiting for attitudes to change. Waiting for an opportunity to act that will further the gospel, that will bring the greatest glory to God. You see God’s delays aren’t signs of failure.

When you get home today look up Hebrews eleven and read through that list of people of faith and you’ll discover that the common theme that runs through all of them is that they were all waiting for God to fulfil his plan, but that none of them saw it.

It’s so hard.  Waiting on God to act when our world seems to be disintegrating around us, when the things we long for God to fix don’t get fixed, when evil seems to triumph.

The Road to Belief

Speaking of trust, Martha is amazing —

Then Martha said to Jesus, “Lord, if you had been here, my brother wouldn’t have died. Yet even now I know that whatever you ask from God, God will give you.”
John 11:21–22


It’s not clear what she’s asking him to do here, she obviously isn’t expecting a resurrection.

Jesus assures her that Lazarus will rise again, Martha understands about the final resurrection from the dead, but that doesn’t ease her current pain.

Then Jesus makes this amazing claim:

I am the resurrection and the life. The one who believes in me, even if he dies, will live. Everyone who lives and believes in me will never die.
John 11:25–26


Now this is very important, not just for Martha and Mary and the disciples, but for us as well. What Jesus is about to do is meant to illustrate what he’s just told Martha. Jesus is the resurrection and the life.

The danger is that we concentrate on the miracle itself that we miss the full significance of it, it’s for everyone!  It’s for you, it’s for me, it’s for anyone “who lives and believes in Jesus”!

Martha, once again is amazing! Don’t you want to have her faith?


This is the last sign in John’s gospel, and it’s a beauty! We learn from this, the reason that he’s come — to bring the gift of resurrection and eternal life.

Jesus the Resurrection and the Life

And so we come to the Tomb.

I don’t think hare restorer will work here!  That rabbit was mostly dead!

As Miracle Max from the film The Princess Bride would say: 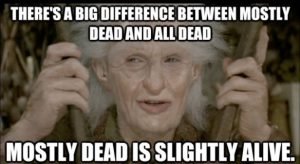 There’s a big difference between mostly dead and all dead. Mostly dead is slightly alive. With all dead, well, with all dead there’s usually only one thing you can do. — Go through his clothes and look for loose change.”
Miracle Max — The Princess Bride


However, Lazarus isn’t mostly dead, he’s all dead. Jesus orders the stone to be taken away, much to the alarm of Martha who can knows what the smell will be like! Jesus reminds them they need to believe and see the glory of God.

Even though they ‘know’ what will happen there’s space for belief in the greater reality of God’s intervention in the world.

Jesus prays a prayer, note that it’s only for the benefit of his hearers, so that they’ll believe that it’s God who has sent him; that it’s God’s power that is about to do this incredible thing.

Then Jesus raised his eyes and said, “Father, I thank you that you heard me. I know that you always hear me, but because of the crowd standing here I said this, so that they may believe you sent me.”
John 11:41–42


That’s it, it’s done. Jesus calls, and Lazarus comes out, wrapped in the burial cloths but alive and well.

And what is the result?

Therefore, many of the Jews who came to Mary and saw what he did believed in him.
John 11:45


How could you not? Here was a man who’d been dead for four days. According to Jewish understanding, after three days the spirit had left the body and the body itself had begun to decompose. Yet here was Lazarus standing before them whole and well again. Who but God could do such a thing? Any doubts they may have had about the things Jesus claimed for himself were suddenly blown away.

And so as we look back to the beginning of this account we discover that the things Jesus said were true. Lazarus’ sickness didn’t end in death, it resulted in God’s glory; it ended in God’s Son being glorified through it.

The result of Lazarus dying while Jesus delayed was that the disciples, along with Martha and Mary and their friends, came to believe in Jesus, not just as a great teacher or a miracle worker, not even as the promised Messiah even, but as the Resurrection and the Life.

We too can read this story and take away from it an assurance that Jesus has the power to give us eternal life, to raise us up at the last day. We can also be reassured that when God seems a bit slow answering our prayers, it isn’t a sign of failure on his part, but it may be that he has other ends in mind to those that we’re focussing on.

But in the end, he is in control of all that happens to us. And we can be encouraged to continue to walk in the light, even when darkness seems to surround us, to continue to believe, in those dark moments, what we knew to be true when we were in the light.

Previous
A pivotal moment for Jesus’ supporters
Next
Spirit Enabled